Sailing in demanding winter ice conditions in the Baltic Sea is all in a day’s work for the crews of UECC’s sophisticated workhorse PCTCs M/V Auto Eco and M/V Auto Energy.

It might be bleak midwinter for landlubbers in Northern Europe coping with Covid-19 restrictions, but not so for UECC’s LNG-powered PCTCs Auto Eco and Auto Energy (both built 2016). It’s the time of year when both ships really come into their own. Carrying 1A Super Finnish/Swedish ice class – the highest ice-class beneath Polar notation – they perform superbly in the kind of ice conditions that would get captains on lower-spec ships shivering in their bridge-coats.

“We are virtually icebreakers and have the capability to open up water for others, as well as rescue ships that might get ‘beset’ or trapped in ice,” says Captain Henryk Laskowski, master of the Auto Eco. The Auto Eco and Auto Energy are unique in that very few PCTCs are ice class. “They are the first ever, and the biggest PCTCs in the world, to be built with 1A super, meaning we can sail in tough ice conditions without icebreaker assistance,” adds Laskowski. With reinforced hulls and equipped with powerful engines, the ships can comfortably tackle ice up to one metre thick.

The current ice situation in the Gulf of Finland can change very quickly as temperatures remain below –15 degrees Celsius, with potential rapid formation of compact ice. “At Hanko the close ice conditions are not that bad in and around the port, but there is limited space to manoeuvre,” says Laskowski. Icebreaker assistance restrictions are in currently force meaning assistance is only given to ships over 2,000 dwt with ice-class 2 and higher.

Although the Auto Eco and Auto Energy are highly manoeuvrable under their own power, with a controllable pitch propeller, bow and stern thrusters and advanced navigation and control systems, they still need tug assistance in certain adverse winter weather conditions to get safely to berth. “I recommend two tugs on arrival and departure for manoeuvring both at Hanko and St Petersburg,” says Laskowski.

‘Ice all the way’

From Hanko to St Petersburg there is ice all the way right now, meaning the passage to the Russian port takes quite a bit longer than usual. “Very close [compact] ice conditions begin from Buoy No 4 in the Bolshoy shipping channel to the St Petersburg pilot station, which is a distance of 52 nautical miles. We calculate 14 to 15 knots as the average passage speed – versus our service speed of around 20 knots,” says Laskowski. “Obviously you have to go slower to prevent ice damage.”

At St Petersburg, there is fast ice that can be up to 40cm thick and up to 20cm thick in the approaches. In such conditions, ships making for the port have to congregate at a given point – right now Buoy No. 4 – then sail in convoy behind an icebreaker regardless of their ice class. “The lead icebreaker decides the order of the convoy to ensure optimal progress, while the captains of each vessel are responsible for keeping a safe distance from the other ships. The line-up can of course change if the ice conditions change, with stronger ships helping clear the way for those less capable,” says Laskowski.

The Auto Eco and Auto Energy are currently sailing a 14-day loop starting and ending in Southampton, with port calls at Zeebrugge, Bremerhaven, Malmö, Hanko at the southwestern tip of Finland and St Petersburg. As well as providing a key trading link between the UK and Russia, the ships load vehicles produced on the continent, Finnish steel products among other commodities, as well as conventional high-and-heavy and breakbulk cargoes.

A further seven ships in the UECC fleet of 16 ships are built to ice-class specifications. “This means we can provide a continuous year-round ro-ro service for customers while northern waters are in the grip of winter,” says Laskowski.

Laskowski has been serving on the Auto Eco since she was built. He was at the yard in China during construction and also captained her maiden voyage to Europe. “It’s a great feeling being on the bridge in command of this beautiful ship, in all weather conditions,” says Laskowski, who has pilot exemption for quite a few ports around the world, requiring a long certification process. “As for ice, approaching ice from open water gives the whole bridge team a buzz no matter how many times you’ve done it before. My responsibility is to keep the crew, the ship and our cargo safe at all times and although the ice season in the Baltic is demanding, especially at night, it’s a lot of fun too – and beautiful.”

“The view from the bridge over the icy sea can be fantastic, especially as the sun sets. And there are curious human touches, too, like the scores of hardy locals you see ice fishing quite some way from shore – I wouldn’t do it but for them I guess it’s quite normal,” he jokes.

Right now, approaching or on the way out of Malmö, for Laskowski and his crew it will be a speedy turnaround at St Petersburg then back to Southampton and some well-earned time off. Both the Auto Eco and Auto Energy have two captains and crews who work in rotation. “Training up the same people means we have great continuity and all feel part of an extended family,” says Laskowski. 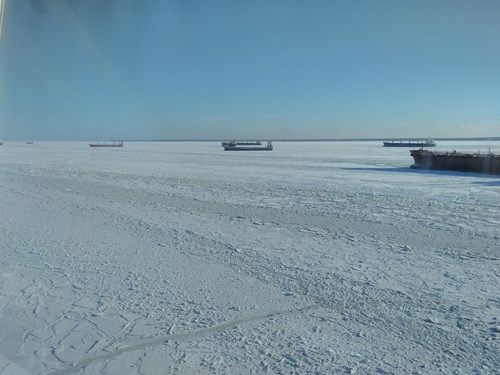 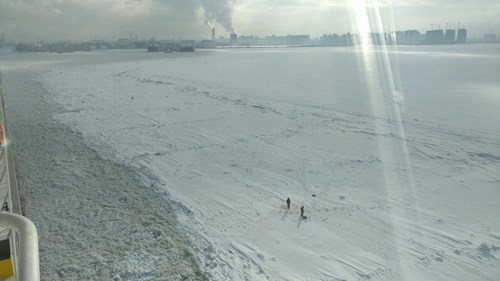 He and his colleagues are also proud of their contribution to making shipping more environmentally friendly by using LNG as a fuel. This significantly reduces CO2 and NOx emissions, as well as almost eliminating sulphur oxides (SOx) and particulate emissions. UECC also has three battery-hybrid PCTCs on order in China that will take the company beyond the IMO target of a 40% reduction in carbon intensity by 2030. The trio will also meet the IMO Tier 3 NOx emissions limitations entering into force in the Baltic and North Sea from 2021 keel lays. “As our CEO Glenn Edvardsen has said before, it’s a giant leap towards decarbonisation,” says Laskowski